This week I am writing a review of Nina Simon’s The Art of Relevance which I completed reading. Simon’s book provides examples, case studies, and practical advice on how museums or organizations can be relevant to many people and how museums’ work can be more vital to the community. I enjoyed this book because it breaks down the various case studies to show many ways any type of organization can show their communities how they can be relevant and why they remain relevant. I also enjoyed her comparison of relevance to being a key to a locked room where meaning lives.

It is a true comparison since keys can open many doors that can lead to opportunities on the other side especially programs that introduce new meaningful connections with people in the community. Also, I found Simon’s book interesting because her layout of the book is not broken up into chapters, like many books I have read in the past, but rather broken into five parts with five or twelve examples, case studies, and advices for the reader. Each of these examples, case studies, and advices are related to the specific parts in the book. She told a story in the introduction which inspired the this book, and I agree with her when she stated that relevance can unlock new ways to develop deep connections with people.

The Art of Relevance is also an important book in the museum education field since our museums can practice this art of relevance through the educational programs offered including public programming, school programs, and summer programs. After reading the book, I felt that I could adapt these advices to my own practices as a museum educator. 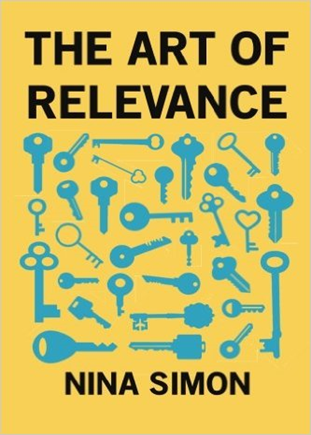 Nina Simon, The Art of Relevance, Nina Simon CC Attribution-NonCommercial, Licensed under the Creative Commons Attribution-NonCommercial 4.0 International License. 2016
The first section answers the question: What is Relevance? Simon had five different examples of relevance in the field. One of the parts called “A Walk on the Beach”, she discussed the 130-year anniversary party for the first surfers in the Americas her museum the Santa Cruz Museum of Art and History planned; three teenage Hawaiian princes put on the first surfing demonstration ever documented on the mainland of North America in Santa Cruz. What she learned from the experience was “…relevance is just a start. It is a key. You’ve got to get people in the door. But what matters most is the glorious experience they’re moving towards, on the other side” (31). Another part in the first section was called “Meaning, Effort, Bacon” which talked about Deidre Wilson and Dan Sperber, the leading theorists in the study of relevance, who argued that the there are two that make information relevant: 1. How likely that new information is to stimulate a positive cognitive effect to yield new conclusions that matter to you; 2. How much effort is required to obtain and absorb that new information (the lower the effort, the higher the relevance). The section also discussed a study she saw in 2015 from the World Health Organization showing that processed meats (such as bacon, ham, and sausages) are among the top five most cancerous products alongside established killers like cigarettes and asbestos; the study is an example of the two criteria for relevance since it creates a new connection to things people care about and it adds information to our knowledge of these topics.
The second section is called Outside In, in which Simon pointed out there are two kinds of people, the outsiders and insiders. She stated that insiders are in the room who know about it, love it, and protect it while outsiders don’t know about those doors exist so they are not interested, unsure, and unwelcome. Therefore, if we want new people to come inside our organizations we need to open doors that speak to outsiders and welcome them in. The third section is called Relevance and Community which expressed the importance of being relevant to one’s community. According to Simon, communities are made of people with shared dreams, interests, and backgrounds, and the more we understand them the more easily we can unlock relevant experiences with them.

The fourth section is called Relevance and Mission which discusses how adapting your organizations’ missions to make it relevant to new people. She viewed organizations as structures stating that every institution has a mission that forms the structure of the room; it is important to not obscure it with tidbits but instead strip back the paint, recommit to its frame, then use it to open new doors to new people. The fifth section is called the Heart of Relevance which explains how it is important to maintain that relevance in your institution. Simon stated that the more someone uses the key the more it becomes a part of them; and therefore, the room changes them and they change the room. In other words, we need to inspire newly introduced visitors in our institutions to keep returning to the institutions. After reading this book I remembered my own experiences with relevance in programs.
When I started at the Butler-McCook House, I gave tours based on the script I received and I used my script to help me remember details of each item in the room and the history of each room and family members. As I continued working in the house museum, I noticed that not many people expressed interest in the narrative I told. This traditional way of providing tours did not help me make connections with most of the visitors. However, as the executive director recognized the need to change the way we run the museum and when I became a part of the team that did research on the house to improve visitor experiences, a shift was made towards creating a better connection with visitors. Visitors are beginning to understand not only the McCook family history and the contents of the house but they also learned about the family’s role in making a difference in Hartford’s community. While I used the script as background information, I had a more inquiry-based approach to ask visitors about how they grew up in their childhood homes to connect people with what growing up in the 19th century house was like for the family who lived there. By incorporating relevance in the tour, more visitors can connect with the history of the house and recognize its significance in Hartford’s history.

If you have read The Art of Relevance, what example in the book did you enjoy? How does your museum or institution use relevance to maintain its significance in the community?

I am a passionate and dedicated individual who is determined to provide local and national history for future generations to appreciate their roots and teach the next generation. My love for museums began from a very young age. When I was a child, my family encouraged myself and my sisters to visit various historic sites and museums including Plimoth Plantation and Salem Witch Museum, and continued as I grew up when I saw places such as the Birthplace of Abigail Adams. My lifelong passion for history led me to earn my Bachelors degree in History from Western New England University and my Masters degree in Public History from Central Connecticut State University. While I was in the Central Connecticut State University Public History graduate program, I worked on the Connecticut Historical Society’s “Cooking by the Book” exhibit that my group came up with the original proposal for. I also helped set up art exhibits at CCSU’s art galleries, and wrote a lesson plan on women contributions to society in the eighteenth century as a final project in the program for the Stanley-Whitman House museum. Along the way, I gained various experiences within school activities and museums. My experiences include working with students in school programs at the Stanley-Whitman House in Farmington, Connecticut, Connecticut’s Old State House, and Connecticut Landmarks Hartford properties. I also volunteered at the Franklin Historical Museum in Franklin, Massachusetts where I provided tours for visitors, helped organize public programs connected with town events, and kept an inventory of the museum’s collections. I became a full time Museum Educator with the Long Island Museum where I teach programs, and take on administrative roles such as schedule programs. Today, I am an independent museum professional working on various projects for museums and historical societies. For instance, I joined the Three Village Historical Society working on various projects, both in person and virtually, in the education department. I continue to look for opportunities in which I educate school groups and the public on the significance of the arts, history, and sciences in our society through the museum education field. View all posts by lindseystewardgoldberg